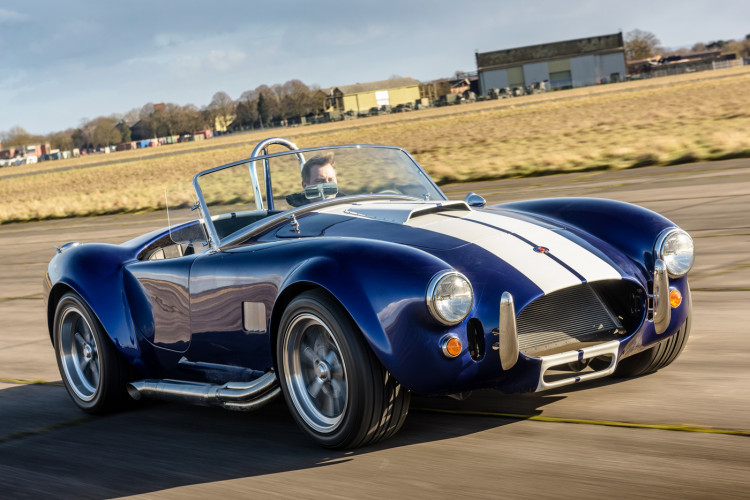 Absolutely loved driving a back to basic car, no power steering, no abs just brute power, and a magnificent sound track to boot, this was a last minute addition and was a great choice, will come back to this site in the future

I got myself a 50th birthday present and came down to the Topgear test track to drive an Ariel Atom and a Porsche GT3, the que was really long due to Covid and all the extra precautions. My first drive was the Atom which was like an extremely quick go kart really fun but I wished I was on a larger track, the Porsche developed a problem before I got my hand on it so I had to choose another car and I chose slightly reluctantly the AC Shelby Cobra. As came out of the pit lane and put my foot down in that beast I the disappointment of not driving the Porsche vanished.

Amazing day meeting and driving my hero. The ac cobra was awsome. The top gear track was great. Good instructors. My in car videos didnt work but myself and partner will be booking again

The Cobra really lived up to it's name at Tibenham Airfield. This car was an absolute monster, tricky to handle but it was incredibly fun. It felt so true and natural, stupid amounts of power and a humungous noise. The instructors and front of house staff at Car Chase Heroes were fantastic, making it a stress free experience in these difficult times. If you visit you MUST go out in the Cobra, just don't be scared if the driver door flies open on a hard right corner, this happened twice and was hilarious. The instructor stayed calm and was happy for me to keep my foot down whilst closing the door. Absolutely brilliant day and will definitely be going back.

The Shelby Cobra was brilliant to drive, the clutch, brakes and the steering was much lighter and easier to control than the Corvette's and that 5.0L engine sound really gave me a buzz of excitement when i put my foot down. When i looked at shelby before i always thought "they're nice but i'd choose a ford, a dodge or a chevrolet". The cobra didn't really attract my attention but after driving it I enjoyed it so much that now Shelby is now my 4th favourite american car company. Lovely Car!!!!!

I had a 3 car experience 2 laps in each car. I went with my son did the same in different cars. A fantastic day was had by both of us. Brilliant cars ,staff and instructors. My only disappointment was the video and photos are very expensive and could not afford them.

Received as a Christmas present, had a fantastic drive in my favourite car, then topped it off with a high speed passenger lap in the Arial Atom driven by an expert !, only down side the video didn’t work but managed to get the photos

Had a really good day. This was a present so no idea on value overall only the on the "extras". I took the Shelby Cobra out first with James as my instructor. James was excellent and I did get to have my flat in a Cobra, which is pretty epic. I have been on a couple of other "driving experiences" and my son races cars, but You have to remember that the instructor has to protect the car and you, so they are not just going to let you loose in 500bhp+ super car on a damp track. James kept the car in a high gear, and I blanted round for my 2 laps. It's supposed to be 3 miles, but this was at Castle Combe which is a 2 mile circuit so you get an extra mile! Whoop! It's not long but its enough to get a taster and experience the car and engine. I drove 4 cars and took the extra ultimate media package at the end. The media was £50, which I think is a bit steep, on the day in Decemeber because it was a dark day the quality was also effected so I think they should have given a discount that day. However, its a business and they have to employ a lot of people to make it run slick which it does. I think having a closed heated awning would have a very welcome addition, so 4 stars overall. James my instructor was excellent and overall it's well worth doing.

This car is something else, after just managing to get all 6’3” of me into it with the roof on, it was such a great drive, none of the driver aids people expect these days, just you, the car and the track. I couldn’t stop smiling for the rest of the day after driving a car I’ve loved for years. Thank you car chase heroes for the opportunity!

People say you shouldn't meet your heroes as you could be disappointed, in this case with the AC Cobra you couldn't be more wrong, I drove the Nismo GTR Skyline first , A very impressive car indeed but did not leave a lasting impression , but however the Shelby Cobra was a different kettle of fish , heavy clutch weighty steering,were forgotten about 100 metres up the start straight the sounds from the sidepipes blew me away , maybe it's just me but the eñtry and exit of every cornerand straight hàd me grinning like a demented loony, a grin that lasted àbout 10 mins after getting out of the car .For me it's more about smiles per hour than anything else well done Car Chase Heroes for getting it right!

Went to Dunsfold park for my 50th birthday, on Friday 8th June, Drove 4 American Muscle cars..Mustang GT350, Gran Torino, AC Cobra and SS Camero and the Optimus Prime Truck. Absolutely brilliant day, all the Instructors were amazing and i had the best time. The only thing was the organisation in the waiting for your drives. Everyone in the same place, waiting to be called, no particular queues, just seemed a mess. One of my cars was out of action, so i was offered a choice of the others instead. Videos and photos were absolutely stunning and i will remember this always.

What an amazing day! Well sign posted and easy to find. Loads of parking and only a short walk from the venue. Registration was easy and quick. I paid the extra £25 for insurance waiver, some people moan about this, but great value considering the value of the cars being driven. Car was in excellent order and sounded as it should of! My 15 year old son drove the GTR and Supra, he loved every minute and asking to go again! If you can get a ride in the Atom driven by a professional, could not stop smiling after that!